I have so many other things I could write about, but this is more important.

We buried my grandfather on Friday.

I drove the family over (sister and nephew included) to the cemetery.  We arrived about a half hour early, and realized it might be the same cemetery my older sister was buried in.  I went into the front office and they actually were able to point us to her grave.

We wandered over and there it was.  How does one feel for that?  How does one act beyond reverent?  I brushed the leaves from the marker and took a picture of it, my hands still wet from the grass and pine needles. 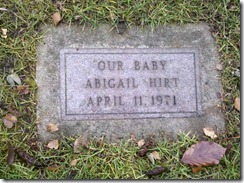 My 2nd has her name.  It took a bit of explaining before she realized that was the case.

Then we drove over to the gravesite for Grandpa.  Getting out there were more people than I expected, but less than I had hoped for.  I don’t know why that was the case, but there you go.

It was hard and sad and good and wonderful.  We experienced it with our kids, our family.  Cheri and Rick were there, of course, as was Robin.  It was a graveside service, and the local Veterans association held the service.  This included honor guard, the folding and presenting of the flag, and the playing of taps.  Grandfather was in the Navy as a young man, and so was honored as a veteran. Go Grandpa! 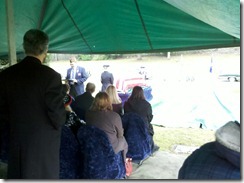 All of my pictures turned out like junk, so this is just to give you a flavor of it.

When it came time for relatives to speak, I stepped up first.  I had a few remarks, but mostly just needed to express mine and my sisters’ love for our grandparents that they still cared for us no matter what we went through in life.

I write this after a long day spent taking the kids around to the Children’s Museum and the monorail.    One end to life, and five new beginnings to life.  I hope that it’s enough of a balance.

I hope I do him proud.  Love you Grandpa.